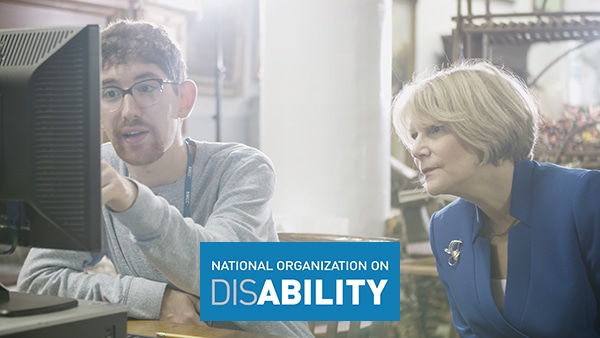 Meet Jacob Waltuck, an employee at a New York prop shop, whose Autism enables him to excel at his job.

In this newly debuted video, “Employing New Sources of Talent”, created by the F.B. Heron Foundation, NOD President Carol Glazer and Jacob sit down for a candid discussion about how he contributes at work and his love for his job—and how the talents Americans with disabilities offer are proving to be a benefit to employers.

This video is one in a series commissioned by the Heron Foundation as part of a campaign, Poor U.S.: Reimagining a Path to Prosperity, which recasts the narrative around what it is to be poor in the United States and suggests ways to reinvent the economy to provide paths to prosperity. Tapping new sources of capable, motivated talent – people with disabilities – is one.

The National Organization on Disability is partnering with leading brands to promote job opportunities for the 30 million working aged Americans with disabilities.

December 9, 2016 – The Chronicle of Philanthropy today featured a podcast with Carol Glazer, president of the National Organization on Disability, on their homepage. Glazer joined The Business of Giving radio host Denver Frederick to discuss the evolution of disability advocacy and how data and technology are undoing workplace discrimination.

Denver Frederick introduces the conversation: When the National Organization on Disability was founded 34 years ago, advocacy for people with disabilities was shifting focus from medical matters to civil rights. Today, the nonprofit is “exclusively about employment,” says its president, Carol Glazer. “It’s the single biggest barrier to a good quality of life affecting working-aged Americans with disabilities.”

That’s a population of 30 million, only 20 percent of whom are employed, as Ms. Glazer notes in this edition of the Business of Giving. That figure has remained unchanged since World War II, despite legislative milestones like the Rehabilitation Act of 1973 and the Americans With Disabilities Act, enacted in 1990 and updated in 2008. Her organization has increasingly taken on a role as coach and guide to employers, offering data tools, webinars, white papers, and lessons from corporations like Lowe’s and Starbucks that have set the pace in integrating people with disabilities into the work force.

In this conversation, Ms. Glazer details the National Organization on Disability’s efforts to remake workplace culture and overcome “the tyranny of low expectations,” promoting technology that levels the playing field for workers with disabilities and helping employers realize the benefits in productivity, persistence, and dedication that comes with hiring people used to navigating challenges on a daily basis.

Listen to the full interview below and/or read a transcript provided by the Business of Giving at the Chronicle of Philanthropy.