The National Organization on Disability was in its eighth year when the Americans With Disabilities Act became law in July 1990. The ADA gave new impetus to the disability movement and a fresh public awareness of the critical issue of the employment of people with disabilities. NOD has made that issue our singular focus.

When he signed the ADA into law, President George H.W. Bush delivered a purposeful message to corporate America saying, “You have in your hands the key to the success of this Act, for you can unlock a splendid resource of untapped human potential that, when freed, will enrich us all.”

This is the first time the nation celebrates an ADA anniversary without its original champion, President Bush, who we were proud to call NOD’s Honorary Chairman until his passing last November. We pause to remember and honor his remarkable legacy.

President Bush considers the ADA one of his crowning achievements, yet as he shared with our Chairman Tom Ridge in 2015, the ADA requires employers to give people with disabilities a chance. With few exceptions, U.S. employers are still not hiring larger numbers of people with disabilities than they did in 1990. We have yet to unlock that potential President Bush spoke of when signing the ADA 29 years ago.

At NOD, we envision a future where employers will be rewarded by the high productivity, problem-solving abilities and diversity of thinking that people with disabilities bring to the workforce. On the day we commemorate the ADA, we are reminded of the reason we were created: To see to it that no ability is wasted, and that everyone has a full and equal chance to play a part in our national progress.

When commemorative events are held this week to recognize the anniversary of the ADA — the landmark Americans with Disabilities Act — it will be the first such anniversary without the man arguably most responsible for its existence. The nation lost President George H.W. Bush last November. As vice president under Ronald Reagan, and later as president, he personally championed and eventually signed the ADA into law in July 1990. Later in life, when President Bush used a wheelchair himself, he considered the civil rights legislation among his greatest accomplishments. I know this because he told me, when the two of us spoke in his Houston office for a video created to mark the law’s 25th anniversary in 2015.

Think of it. A man who was among the youngest to fly Navy fighter jets in World War II and who skillfully guided the United States out of the Cold War — among countless other accomplishments during a remarkable career of public service — recognized the significance of the ADA for its lasting impact and reach and considered it one of his crowning achievements. Lex Frieden, who at the time of the ADA’s passage was the director of the National Council on Disability and arguably equally as responsible for the ADA as President Bush said, “George Bush will be viewed by people with disabilities and their families as the Abraham Lincoln of their experience.”

I’m not sure Congress could pass legislation like the ADA today. It required strong bipartisan work — with lawmakers reaching across party lines to find compromise — and was passed by strong majorities in both parties. As a congressman at the time from northwest Pennsylvania, I was proud to be among them.

But as Frieden would explain in interviews over the years, the legislation got its start thanks to a commitment George Bush made as vice president to help if he ever found himself in a position to do so. He certainly delivered.

Yet President Bush shared with me his personal disappointment that the ADA has not fully delivered on all it promised. When he stood on the South Lawn of the White House on July 26, 1990, moments before putting pen to paper, President Bush delivered a purposeful message to corporate America. He told the business community, “You have in your hands the key to the success of this Act, for you can unlock a splendid resource of untapped human potential that, when freed, will enrich us all.”

He reminded the business community that they themselves had called for new sources of workers, and encouraged them to hire people with disabilities to fill those needs, as they would “bring diversity, loyalty, and only one request: the chance to prove themselves.”

Sound familiar? Nearly 30 years later, we find ourselves at near full employment, and employers large and small are scrambling to find sources of talent. But despite record low unemployment, a survey of nearly 200 companies that collectively employ more than 9.5 million people reveals that, with few exceptions, U.S. employers are still not hiring larger numbers of people with disabilities than they did in 1990. We have yet to unlock that potential President Bush spoke of when signing the ADA.

A closer look at those survey results, released in late May by the National Organization on Disability, provides some clues. While 98 percent of companies report that overall diversity — in categories such as gender, race and sexual orientation — is promoted publicly by a senior leader, that number falls precipitously to 76 percent for disability. Nearly 9 in 10 companies maintain employee resource groups focused on diversity, while only 64 percent have similar ERGs for disability. And when it comes to hiring, barely half focus on campus recruiting for students with disabilities and only 42 percent create internships for that same population. The various approaches to hiring people with disabilities all fall to the bottom of the list, despite how frequently we hear that hiring is their biggest goal.

So while we are seeing more employers embracing the notion that they cannot afford to miss out on quality talent — as President Bush implored — these ideas are not translating into hiring numbers for people with disabilities. Many employers either have not made it a priority or simply have not been able to figure it out.

Until they do, the ADA will not fully have been realized. That is why the National Organization on Disability is convening regular meetings with a dozen of the leading disability groups across the country, bringing our powerful resources together to find meaningful solutions. We must continue to work as partners with the business community, as well as hold federal contractors accountable for meeting reasonable hiring goals.

This is not about charity. Businesses that prioritize hiring people with disabilities report the positive impacts to culture and the bottom line. There are 20 million Americans with disabilities who are ready to work — who are ready to bring their ingenuity, tenacity and creativity to the workforce. To honor President Bush’s legacy, let’s make sure when we celebrate the ADA’s 30th anniversary this time next year that we’ve moved closer to realizing his vision.

Ridge, the 43 rd governor of Pennsylvania and first U.S. Secretary of Homeland Security, is chairman of the National Organization on Disability.

Read on The Houston Chronicle

In a move to bring “more diversity to the keyboard,” Apple released new “disability-themed” emojis Tuesday that will be available in the fall.

Users of iPhones will soon be able to send a guide dog, an ear with a hearing aid, a person in a wheelchair, a prosthetic arm and a prosthetic leg, among other new options. 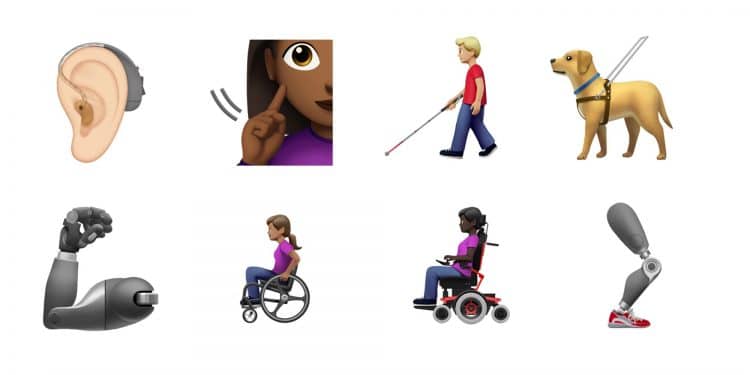 “Celebrating diversity in all its many forms is integral to Apple’s values and these new options help fill a significant gap in the emoji keyboard,” the company said, unveiling the new designs ahead of World Emoji day on Wednesday.

The emojis have been in the works for a while. Apple proposed the designs last fall to the Unicode Consortium, a nonprofit that sets the standards for emojis.

The announcement has been praised by many on social media as an important moment for inclusion for people with disabilities.

“Representation matters and for those living with MS, some of whom have visible disabilities, this is an important way for them to feel included and seen,” said Cyndi Zagieboylo, president and CEO of the National Multiple Sclerosis Society. 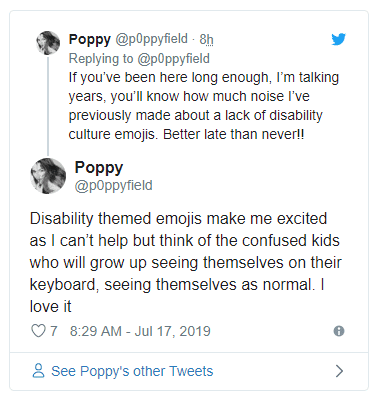 The National Organization on Disability (NOD), a nonprofit that focuses on employment issues for people with disabilities, agrees, but added their organization is hoping for more than keyboard representation.

“These new emojis will enable one billion people with disabilities around the world to more fully and authentically express themselves,” NOD’s director of external affairs, Priyanka Ghosh, said in a statement to NBC News. “Perhaps corporate America can also seize upon these new icons to embed disability seamlessly into their everyday lexicons, enabling employees to better communicate with each other and build more disability-inclusive cultures.”

Apple also announced that along with the disability-themed emojis, users will soon be able to personalize the hand-holding couple emojis, opening up more than 75 combinations for the couple’s race and gender.