Caring for Her Son with Disabilities Led to a New Career

The president of the National Organization on Disability helped her child overcome a lifetime of challenges. 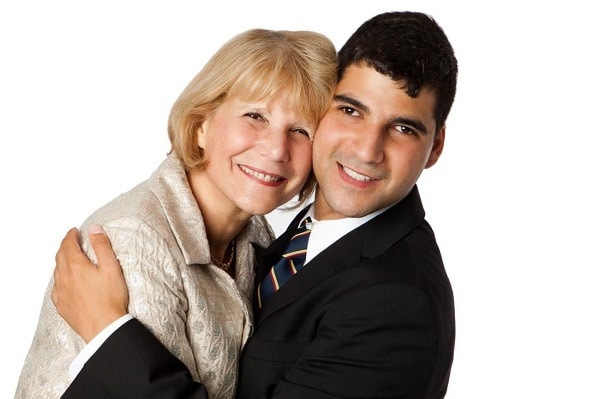 The conference floor was buzzing last May in Minneapolis, where I was speaking as president of the National Organization on Disability, a private nonprofit that focuses on increasing employment opportunities for Americans with disabilities.

I wasn’t alone at the conference: My 27-year-old son, Jacob, who himself has disabilities, had traveled with me from our home in New York City. “It’s ability, not disability, that counts,” Jacob proudly told the attendees, despite complaining of feeling sick to his stomach earlier.

By the time we landed back in New York the next day, Jacob was in a lot of pain. So as we had more than 40 times before, we rushed to the emergency room at New York University Medical Center, the same hospital where Jacob had been born with hydrocephalus—a rare, potentially fatal fluid blockage surrounding the brain—and had his first surgery to install a shunt to drain the fluid. Was the shunt malfunctioning again?

Yes, but this time it wasn’t the part implanted in his brain. Instead, it was the end of the shunt that emptied fluid out through the peritoneal cavity in his abdomen. The hospital pumped Jacob’s stomach twice, but his bowel was still obstructed. He would need another risky surgery—Surgery Number 31, to be exact. Every time, my own stomach churned knowing there was a chance Jacob wouldn’t survive or would come out of the operation with additional challenges.

Uncertainty had dogged us every step of the way with Jacob. It wasn’t the hydrocephalus itself that had caused his physical and cognitive disabilities. A hospital-acquired bacterial infection had inflicted considerable brain damage, leaving my then-husband and me with nothing but questions and confusion: Would our son ever be able to walk? How much would he be able to see? What would his level of cognitive functioning be?

The answers came, though slowly: Jacob walks with a slight limp; he is severely visually impaired; he reads at a third-grade level.

As he approached puberty, Jacob wanted to be bar mitzvahed to celebrate becoming a man with his faith community. When I inquired, our rabbi said our temple didn’t have the capability to do that for Jacob. I was devastated. “Every Shabbat, we pray for the Jews in Russia, in Argentina, but here you have a member of your own congregation who needs you,” I said. “Where is the inclusivity?”

The next day, the rabbi called and said she hadn’t slept the night before, thinking about Jacob, and that she would help put together a program for him to learn the Hebrew he needed to read his passage from the Torah. Jacob spent more than two years learning the Hebrew phonetically and was bar mitzvahed on time at age 13. There wasn’t a dry eye in the house when he finished reading the sacred text, and the program we developed is still used citywide.

At NYU Medical Center, the staff know us so well, they always let me put on scrubs to go with Jacob into the operating room and stay until they put him under. As he lay on the OR table that day last May, I told him he’d be able to get back to work soon, back to his three-day-a-week job, helping out at the 14th Street Y, even though I didn’t know if that were true.

“What do you like best about your job?” I asked to distract him.

“I like delivering the mail to everyone,” he said. “And I like taking the 6 train to get there!” Jacob is fully travel-trained; at this point, he has the entire New York City subway system memorized.

The nurse slipped the oxygen mask over his face. “And I want to play basketball and go to my songwriting class, and eat pizza with my friends,” Jacob murmured.

His voice trailed off, and I was left to imagine what life might be like if he didn’t wake up. No more making French toast and waffles together on Sunday mornings and quibbling about who does the dishes. No more chatty walks through Central Park after dinner. No more going to see funny movies—Steve Martin is Jacob’s favorite actor—or to Broadway musicals.

Yet even in these extreme situations, I still love being the CEO of Jacob, Inc., as I started calling myself many years ago. My job is to find out his preferences and his needs as he perceives them and to help him, whether it’s presenting him with choices or drawing him out. But that’s not my only job.

When Jacob was little, I worked in affordable housing development. In 2005, when he was 13, I was offered a consultancy for the National Organization on Disability, or NOD, based on my public policy experience. I had to think long and hard about whether to accept the position—did I really want to live disability 24/7?

Work had always been a welcome distraction for me, a much-needed way to keep balance in my life. But then I rewatched Geraldo Rivera’s 1972 exposé on the inhumane conditions at Willowbrook State School, the institution for the intellectually disabled in Staten Island. And I saw, in the wake of that scandal, how the mothers of those children successfully organized to bring about the Education for All Handicapped Children Act.

All those mothers before me had made it possible for Jacob to have a wonderful education, so why on earth wasn’t I giving my talents to a movement that had made such an impact on my family? In 2009, I took over as president of NOD, and I haven’t looked back.

As the hours of Jacob’s surgery ticked by, I lay down on the little pull-out couch in his hospital room, where I’d spent so many sleepless nights. I thought back to the time when he was eight and suffered a shunt malfunction while I was on a business trip to Boston. It was 2000, and I didn’t yet have a cell phone.

After a quick calculation, I realized that between the flight and cab rides to and from the airports, I would be completely in the dark about my son’s condition for well over two hours. Should I jump on the next flight to New York, I thought, or should I stay here close to a phone?

I decided I needed to be there with Jacob, so I rushed for the next flight. On the plane, I sat with my hands gripping the seat rest, looking out into the vastness of the clear blue sky, above even the clouds. This is entirely out of my hands, I thought. I am so insignificant, and as much as I try to take care of everything for my son, I have to trust in the power that’s outside of me, a power greater than myself and even greater than my love for my son.

And so here, almost 20 years later, back at NYU Medical Center, I again opened myself to complete acceptance of the situation before me, although it taxes the entire fiber of my being every time. After several hours, Jacob was out of surgery. The doctor said they’d been able to clear the obstruction, caused by scarring from multiple shunt surgeries.

A couple days later, I listened as Jacob held bedside court with the doctors and residents, regaling them with the song he’d written: “I’m made up of kindness,” he sang. “I have a good heart. Sometimes I’m funny. I’m pretty smart.” I never cease to be amazed by that light, that smile, that spirit that are so manifest in Jacob, this young man of mine who has had his work cut out for him from Day One.

“That’s my mom,” he told the doctors, pointing to me. “She’s a very famous person, and she’s nice.”

It’s an ongoing challenge being both the CEO of Jacob, Inc., and the president of NOD, but they’re forever entwined in my heart, and I wouldn’t trade my life for anything in the world.

This article was originally published on Guideposts.org.