Proponents claim that H.R. 620, called the ADA Education and Reform Act, is intended to strengthen the ADA and give businesses the opportunity to react prior taking legal action.

Today, the U.S. House of Representatives voted 225 to 192 to pass H.R. 620, a bill referred to as the ADA Education and Reform Act that—if passed by the Senate and signed into law by the president—would change and limit certain rights that were first afforded to disabled people 28 years ago under the Americans With Disabilities Act (ADA). 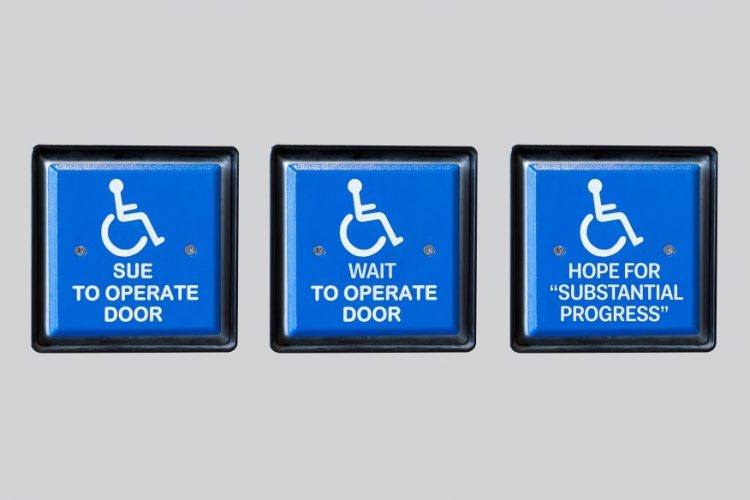 Per the current ADA rules, those who believe they are being discriminated against by architectural barriers in places of public accommodation—such as grocery stores, doctors offices, recreation facilities, private schools, and homeless shelters—are entitled to file suit for immediate legal intervention. (They can also speak directly with the business or file a complaint with the Department of Justice.) But under H.R. 620, complainants filing suit would first have to deliver a written notice identifying the issue, allow 60 days for the business owner make a plan to address the architectural barrier, and allow an additional 120 days for the business owner to “make substantial progress in removing the barrier.”

While some officials like representative and bill co-sponsor Ted Poe (R-TX-02) believe according to a Jan. 2017 press release, “the integrity of this important law is being threatened … [because] certain attorneys and their pool of serial plaintiffs troll for minor, easily correctable ADA infractions so they can file a lawsuit and make some cash,” others fear that loosening these restrictions deincentivizes business to proactively adhere to ADA regulations.

Former Pennsylvania governor and current chair of the nonprofit the National Organization on Disability Tom Ridge outlined this threat in an article for The Hill: “A business that did not comply would face no consequence until after it received a legal notice from a person with a disability who was harmed, detailing the specific violation of the law,” he writes. “And then the business would have six months to do something about it and would merely be required to make ‘substantial progress’ in removing barriers, instead of actually providing access.”

The American Civil Liberties Union shared similar fears, in a public document, and outlined new loopholes the law would create: “This bill would also effectively change Title III’s requirements from providing access to making ‘substantial progress’ in removing barriers. Progress is not access. Changing the standard under the ADA from access to substantial progress would not only harm the civil rights of people with disabilities but would also increase litigation due to uncertainties about what constitutes ‘substantial progress.’ ”

The bill also calls for the creation of a program to educate state and local governments, as well as business owners on strategies for promoting accessibility to public accommodations to those with disabilities.