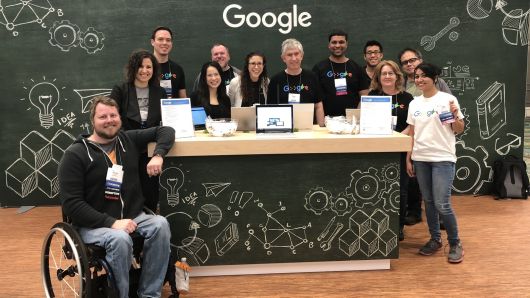 Homework is a drag for any high schooler, but for the class of 2006’s Laura Palmaro Allen, even starting an assignment required a laborious, multistep process.

She and her family had to strip her textbooks from their bindings, run the pages through a high speed scanner, and digitize them — all before she could use text-to-speech software to actually ingest her history lesson or reading exercise. Allen has limited vision because of a rare eye condition called Choroidal Osteomas: At the time, her school didn’t offer any easier ways to accommodate her.

Fast-forward a decade and a half and Allen now regularly coaches visually impaired kids on far simpler ways to get their work done using near-ubiquitous smartphones or laptops. As a program manager for accessibility for Google‘s Chrome software, she not only gives demos, but spends her days making the company’s products work better for people with all different kinds of disabilities.

Over the past several years, the tech industry generally — and Google specifically — have been more deliberate about baking accessibility into products, and beefing up overall resources for the roughly one billion people worldwide with some form of disability.

While there’s still considerable work to do on existing products, Google sees its next big challenge as exploring how it can use its technology to help make the the wider world — not just the bits and bytes of digital screens — more accessible.

Here’s how the company’s trying to make that happen.

From grassroots advocacy to a cohesive system

Allen first joined Google in a sales role in 2010. She quickly noticed ways that products she used every day, like Docs and Gmail, could be improved for blind or low-vision users like herself.

Back then, there were some Google employees focused on accessibility, but the group was small and scattered. It spurred Allen to take on a “20 percent project,” consulting with different product teams across the company.

By 2013, Google realized that it needed to do better and do more. It launched a centralized Accessibility team to oversee all its products, as well as user research and employee education focused on disabilities.

The crux of that change was that while accessibility-related product decisions used to too-often rely on grassroots advocacy from people like Allen, there’s now a standardized process in place.

“Any new product or piece of a user interface needs to go through a set of accessibility checks and tests,” she said. “In the same way that privacy and security is checked for every product, accessibility is now checked as well.”

Allen now works full-time on making sure Google’s browser, operating system, and laptops work well for people with hearing, vision, dexterity, or cognition impairments. For example, the ChromeVox screen reader and adjustable magnification and contrast settings aid visually impaired users, and there’s a keyboard guide for people who can’t use a mouse.

Eve Andersson, who heads up Google’s centralized Accessibility team as the director of engineering, says the goal is to codify accessibility into every stage of a product’s life-cycle.

That kind of focus pays off widely, according to Dmitri Belser, executive director at the Center for Accessible Technology.

“Designing products with disabilities in mind creates products that are better for everybody,” he said. For example, captions aren’t just helpful for deaf people and even if you’re not visually impaired, high-contrast fonts are just easier to read, period. Plus, disability shouldn’t be a matter of us versus them.

Google is quick to admit that it still has a ways to go to improve its existing products, but the company is eying another kind of tech potential, too.

“Disability is still so stigmatized that disabled people often face the ‘tyranny of low expectations,‘ where less is expected of them,” says Carol Glazer, president of the National Organization on Disability (NOD). “But you can’t just assume that people with disabilities are sitting at home in front of their computers — they’re out and about in the community.”

While most of Google’s accessibility efforts center on making all its digital products work better for people with disabilities, Andersson believes that the big opportunity lies in finding ways to use Google technology to make the physical world more accessible.

In March, Google Maps introduced “wheelchair accessible” routes in transit navigation. In May, it previewed a forthcoming app called Lookout that uses a smartphone camera, computer vision, and natural language processing to give users real-time descriptions of the world around them.

The latest safety report for Alphabet’s self-driving car unit, Waymo, includes a section about how it’s developing features like braille labels and audio cues (though it doesn’t mention accessibility for wheelchair users).

Andersson sees voice-controlled smart assistants as being one of the clearest ways to make many more products accessible. As connected-devices become more popular, blind or mobility-impaired people can suddenly control a much wider range of products simply by speaking.

For example, Google’s smart home division has approached senior living facilities to try to figure out how it could tweak its products to work better for older people, several people familiar with the discussions previously told CNBC.

“The possibilities are just wide open,” Andersson says. “With the advances that are happening now in AI and computer vision and internet of things, there is so much opportunity.”

While Google works to improve its own products and processes and launch into new domains, the Accessibility team has also ramped up its external focus.

Google reps sit on various web accessibility standards boards and committees, and the company publishes accessibility guides for third-party developers. It launched a free online accessibility development class, which includes training that all new Google employees complete during orientation, and Allen just helped put on an event with Teach Access, an organization that aims to make accessibility training mainstream in higher education.

Larry Goldberg, one of the founders of Teach Access and a director of accessible media at Oath, says that he’s seen an acceleration in interest, resources, and awareness from all major tech companies over the past half decade, in both product development and representation.

“The idea of ‘diversity in tech’ has traditionally looked at women, people of color, and LGBT representation— and now disability is becoming a bigger part of that conversation too,” Goldberg said. “The best way to make sure that products work for their stakeholders is to have people with disabilities on staff: It’s not just what we create, but the way we create it and who creates it.”

NOD’s Glazer says that the tech industry still ranks lower than others when it comes to disabled representation, according to its disability employment tracker.

Part of attracting disabled candidates is making sure the work environment accommodates them seamlessly. Andersson said that the Accessibility organization has steadily helped steer all Google’s campuses to being better equipped for people with disabilities. That includes small tweaks, like putting braille labels on the food in its micro-kitchens, or wider initiatives, like guiding managers on how to make every presentation accessible.

“We’re working really hard to make things better,” Allen stated. “I can’t say that everything is perfect or that our technology works for everyone, but we’re learning and changing so much all the time and that’s exciting.”