‘It’s Like Having No Testing’: Coronavirus Test Results Are Still Delayed

A shortage of chemicals needed to test for the virus is part of what is slowing turnaround times.

Posted on August 4th, 2020 | By Sarah Mervosh and Manny Fernandez 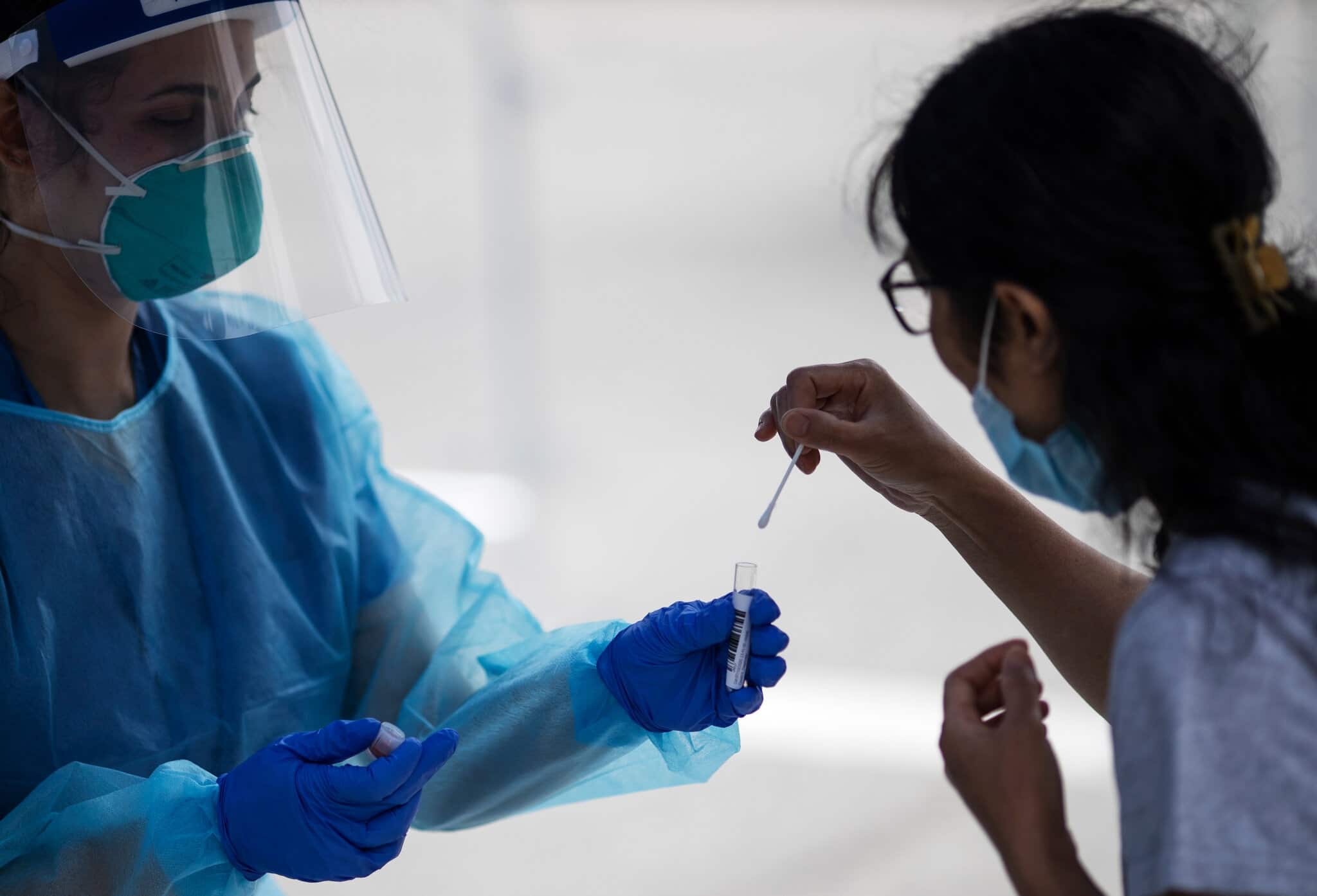 Frustrated by a nationwide testing backlog, the governors of six states took the unusual step of banding together on Tuesday to reduce the turnaround time for coronavirus test results from days to minutes.

The agreement, by three Republican governors and three Democratic governors, was called the first interstate testing compact of its kind. The six states — Louisiana, Maryland, Massachusetts, Michigan, Ohio and Virginia — agreed to work with the Rockefeller Foundation and two U.S. manufacturers of rapid tests to buy three million tests.

The bipartisan plan highlights the depth of the testing problems in the United States more than six months into the pandemic.

U.S. FAILURE
Slowing the coronavirus has been especially difficult for the United States because of its tradition of prioritizing individualism and missteps by the Trump administration.

The United States is testing about 755,000 people a day, up from about 640,000 per day a month ago, and far more than in April and May, according to the Covid Tracking Project. But numbers alone do not tell the whole story. With testing chemicals and other equipment in short supply, and a surge in coronavirus cases nationwide leading to skyrocketing demands, many Americans are still having to wait many days for results, effectively rendering those tests useless.

Most people who are tested for the virus do not receive results within the 24 to 48 hours recommended by public health experts to effectively stall the virus’s spread and quickly conduct contact tracing, according to a new national survey by researchers from Harvard University, Northeastern University, Northwestern University and Rutgers University.
The survey — representing 19,000 people from 50 states and Washington, D.C., who responded to an online questionnaire last month — found lengthy wait times among those who had been tested for the virus, about 18 percent of all respondents. People who had been tested for the virus in July reported an average wait time of about four days. That is about the same wait time for those who reported taking a test in April. Over all, about 10 percent of people reported waiting 10 days or more.
Respondents in a vast majority of states reported a median turnaround time of at least three days, including residents of California, Florida, Texas and other hot spots.

The survey also found disparities across racial groups, an indication that people who are hit hardest by the pandemic are also having to wait longer for test results. Black people surveyed reported an average wait time for results of five days, and Hispanic respondents reported an average wait time of 4.6 days, compared with 3.9 days for white people.

“Testing is just not quick enough,” said Matthew A. Baum, a professor of public policy at Harvard University and one of the researchers in the group, which found that wait times were “strikingly similar” across the country. “This is an enormously widespread problem.”

The challenge, experts say, is a basic issue of supply and demand. About half of all coronavirus tests are conducted by large-scale commercial laboratory companies like LabCorp and Quest Diagnostics, which are racing to turn around swabs while competing with a global market. There is also a critical shortage of certain equipment and supplies, including reagents, the chemical ingredients needed to detect whether the coronavirus is present in a sample.

Federal officials argue that long wait times are unusual, citing figures that more than 80 percent of tests are completed within three days. With plans to reduce the share of tests done by commercial labs, shifting more responsibility to hospitals and other facilities where tests can be done in as little as 15 minutes, officials say that turnaround times are expected to improve soon. Still, labs around the country have been feeling the pressure for weeks.

In Brunswick, Ga., lab technicians are working around the clock. Machines churn out results in 50 minutes to four and a half hours, but there are so many orders that the labs cannot keep up. Regular shipments of chemicals needed to test for the virus do not last even a week, so pathologists have begun to carefully dole out their supplies.

“We literally ration tests,” said Dr. Patrick Godbey, the president of the College of American Pathologists and the director of two labs in the Brunswick area. He estimated that for every test his labs are able to perform, they have to send three to national commercial laboratory companies.

“Why keep a backlog?” he said. “Tomorrow is going to be just as busy.”

In California, Dr. Amir Jamali, an orthopedic surgeon, had to order swabs from eBay in order to test surgery patients at his practice in the Bay Area. He paid about $50 for a bundle of five, which he said was far above the normal price. But now, Dr. Jamali said, the effort has been largely for naught because turnaround times at local labs are inching longer by the day.

“We used to be able to get it within 24 and 48 hours,” Dr. Jamali said. “Almost every week it’s increasing to three day, five days, seven days, 10 days.” In that time, he fears his patients could have gone to a party or a barbecue, potentially exposing other people, as well as his staff and other patients. Some days, he has had to cancel surgery rather than risk exposure.

The problem spans much of the country. In Alabama, the health department recently put out a warning that the turnaround time for test results has ballooned to an average of seven days.

“A test result that comes back in seven or eight days is worthless for everybody — it shouldn’t even be counted,” said Dr. Amesh Adalja, a senior scholar at the Johns Hopkins University Center for Health Security and a physician in Pittsburgh. “It’s not a test in any kind of effective manner because it’s not actionable.”

Despite a shortage of the chemical reagents, Dr. Adalja said he typically has no problem getting a quick test for hospitalized patients, who are given priority. But people who go to a drive-through clinic or walk into a CVS may have to wait much longer for their tests to come through the system.

Based on federal guidance, LabCorp said it was prioritizing hospitalized patients and nursing home tests. “All other testing for patients are performed in the order in which they are received,” a spokeswoman said in a statement. As of July 30, the company reported that its turnaround time for test results was two to three days from when the sample was picked up.

Quest Diagnostics, another major commercial lab, is reporting a turnaround time of five days for all patients, and two for patients who were the highest priority.

‘THE PHOTO DOES NOT LOOK GOOD’
A Georgia schools superintendent defended the district’s reopening plans after a photo went viral showing a packed hallway with no social distancing and few masks.

James Davis, executive vice president of general diagnostics for Quest, said that the company had recently ramped up testing by acquiring its own testing process and ingredients, and that it was already seeing improvements in turnaround times. But he said there was only so much that can be done because a majority of about 150,000 tests that Quest performs each day rely on automated testing machines from two companies that must use reagent kits from those companies, similar to a Honda car that needed a replacement part made by Honda.

“Right now, we live hand to mouth,” he said of the chemicals. “I need a shipment on Monday to make sure all of my labs run through Wednesday, and then on Wednesday, I need another shipment,” he said, adding, “That’s how tight the supply chain is.”

The six-state agreement announced on Tuesday showed how the lack of a federal testing program has left municipalities and states to fend for themselves. The Trump administration has provided new support to hard-hit regions by providing free coronavirus testing in cities through a “surge testing” program announced last month. But the bulk of government-sponsored testing has been provided by cities, counties and states that hire third-party contractors such as Quest and LabCorp. As a result, the length of the delay varies between states, and within them.

In Texas, officials in San Antonio said it was taking 24 to 36 hours to get test results back at a free government-run testing site at Freeman Coliseum. The wait was longer at Legacy Community Health clinics in Houston and the surrounding Gulf Coast region, where test results were on a two-day to five-day turnaround time.

On Tuesday, officials in Harris County, which includes Houston, said they were increasing testing capacity and shortening lab turnaround times as part of federal “surge testing.” The temporary support, which lasts until 30,000 testing samples are reached at two free testing sites, will have test results in three to five business days.

The compact was negotiated by the Rockefeller Foundation and Gov. Larry Hogan of Maryland, a Republican, during the final days of his tenure as chairman of the National Governors Association. Instead of each of the six states separately ordering thousands of tests, the group of states is instead in discussions with the two U.S. manufacturers of antigen tests, the Quidel Corporation and Becton, Dickinson & Company, to buy three million tests, or 500,000 tests per state.

Unlike the more readily available tests that use polymerase chain reaction, or P.C.R., antigen tests can rapidly determine whether a person has been infected by the virus by detecting fragments of virus in a sample. The tests will deliver results in 15 to 20 minutes, the governors said. Still, scientists have said the tests can frequently miss infections. Tests from both Becton Dickinson and Quidel could produce false negative results between 15 and 20 percent of the time.

The Trump administration’s testing czar, Adm. Brett P. Giroir, told Congress last week that “turnaround times are definitely improving.” But Admiral Giroir, a doctor and the assistant secretary for health, testified that getting test results within two to three days “is not a possible benchmark we can achieve today.”