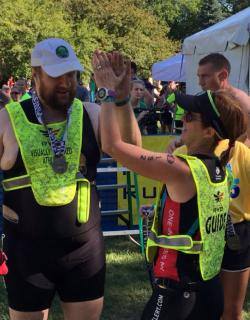 Years ago, when people would ask me to describe how my vision was, the best analogy that I could give them was ‘how a photo looks when it’s gotten wet and then dried’. Essentially, I was telling them that it would be faded, blurry and distorted.

Photo of James Gilliard at event high-fiving a teammate

That description was from more than twenty years ago. In the intervening years, my vision has greatly declined due to RP (retinitis pigmentosa). It’s gone from being able to read normal books and papers to needing a small magnifier to relying on technology to be ‘normal’.

Having a strong background in computers and technology, I started my own IT consulting company (Meow Productions) in 2001. After graduating from college, I began working within the payment industry (CardConnect Cardnetco). At the beginning of both these work endeavors, things worked reasonably well — a large monitor, a CCTV device at home and a Magnabrite in my pocket made things workable.

I think the biggest reason I've been able to succeed while the vision continues to decrease is my ability to adapt. James Gilliard Senior Consultant / President, CardConnect Cardnetco / Meow Productions

However, as time progressed and my vision decreased, these weren’t enough. Slowly I had to start relying on others to help with forms and paperwork that I used to be able to do. I also noticed that it became harder to make out things on the computer screen. When these occurred, we found ways to adapt so that others could help me with the paperwork, along with finding a better monitor.

Thankfully when the next major changes occurred in 2011, technology was there to help soften the blow. Between major parts of our processes becoming paperless, technology such as the Pebble and an even larger screen, things continued pretty much ‘status quo’.

Almost 10 years from that point, I think the biggest reason I’ve been able to succeed while the vision continues to decrease is my ability to adapt. There are so many different pieces of technology that I now use on a daily basis. And the technology is only going to get better as time goes on, making ‘normal’ life more obtainable.

Over the last several years, one important benefit of working has been a sense of purpose. Even when there are bad days, it’s much harder for me to say ‘I’m just going to go hide from the world’ since I know that my colleagues and clients are counting on me. Being able to work through those times has also helped to build confidence to try other things I would have never though possible.

Recently, this has included an unplanned and unexpected athletic career. The snowball started with a single 5K and has now grown into 12-15 Triathlons and 8-10 5Ks per year. It’s been and continues to be possible because of the support of Dare2Tri, Challenged Athletes Foundation, Team RWB, Achilles, Naperville Noon Lions Club and a long list of other supporters, all of whom I’m extremely grateful to. The family and support networks that I’ve built because of this are and will continue to be extremely beneficial as the vision decreases. And I know that because of their support I’ll find ways to continue to adapt and be able to work even when I no longer have sight.

I believe that ANYONE with a disability can and WILL be a valuable part of any company’s workforce if they’re willing to try. An employer believing that they can be creates a huge win for both of them. It also helps others have the desire to ‘come out of the shadows’ and talk with employers when they see friends with disabilities succeeding in their new positions.