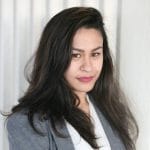 Aubrey earned her bachelor’s degree in Sociology at the University of Hawaii at Manoa in 2016. It  was there that she developed her interest in the study of societies and the collective issues we face. During undergrad, she was a full-time intern for Senator Mazie K. Hirono in Washington D.C. and at the City and County of Honolulu Department of the Prosecuting Attorney, Domestic Violence Division. After graduating she joined Senator Hirono’s Honolulu office as a Staff Assistant and simultaneously began working part-time at the Hawaii Children’s Foundation as a Communications Assistant. Loving the challenge and impact of non-profits, she became a Fund Development Coordinator at Girl Scouts of Hawaii before relocating to New York City and joining NOD in 2018.