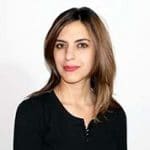 Amber Cecil has 15+ years of experience in non-profit management with a focus in communications and marketing, as well as program management and development. After working in Chicago and Detroit, she joined NOD in 2012. In 2014, Ms. Cecil became the Communications Manager, before becoming Associate Director, Brand Strategy in 2019. In 2023, she assumed the role of acting director of External Affairs.

Previously, Ms. Cecil held positions with Kresge Arts in Detroit, a collaborative program of the Kresge Foundation and the College for Creative Studies (CCS), and the Museum of Contemporary Art Detroit (MoCAD).

She earned her bachelor’s degree from the University of Michigan, Ann Arbor, and she has also pursued coursework at Pratt Institute and Baruch College in digital marketing and design.