The Visible and Invisible Challenges that Workers with Disabilities Face

People with disabilities are more likely to be jobless, work part-time, or be self-employed than those without disabilities. To better understand what these workers face, the Center for Talent Innovation (CTI) recently released an expansive, global study analyzing this demographic — “a talent pool that many companies neglect.”

In 2016, the United States Justice Department finalized a broader, federal definition of what qualifies as having a disability. The new amendment recognizes a wider group of people who live and work with visible and, as CTI calls it, “invisible” disabilities.

The result in the U.S. is that workplaces will be tasked with responding to an influx of people who classify as having a disability — or confront the fact that many people with disabilities continue to be shut out. Here’s a snapshot of the challenges that CTI’s study participants presented.

CTI finds that under the new federal guidelines, “30% of white-collar workers actually meet the US government’s definition for having a disability.” Although nearly half of all people with a disability are age 65 and up (per BLS), CTI found that specifically among working Americans employees with disabilities were more likely to be millennials. The organization chalks this up to two key areas: greater access to education, and increased rate of diagnoses.

“Thanks in part to support and accessibility of schools mandated by the ADA, more people with disabilities are completing college than ever before — an effect that is strongest among Millennials who completed their education post-ADA,” the study’s authors write. “Second, increasing diagnosis rates of certain conditions — mood disorders like depression, learning disabilities like dyslexia, developmental differences like autism, and other forms of neurodiversity — also contribute to a higher proportion of disability in the Millennial white-collar workforce.”

Many Workers Choose Not To Disclose Their Disability

CTI writes that the National Organization on Disability reports “on average that 3.2% of their workforces are employees with disabilities.” The study’s authors attribute low disclosure rates to workers not realizing they can be considered to have a disability under the new federal guidelines. And, more intentionally, many employees with disabilities “are counseled by family, friends, even employment attorneys, to avoid disclosing their disabilities—for fear of discrimination and other negative repercussions.”

People who do choose to disclose generally do so on a “need-to-know” basis, with the people they interact with most. 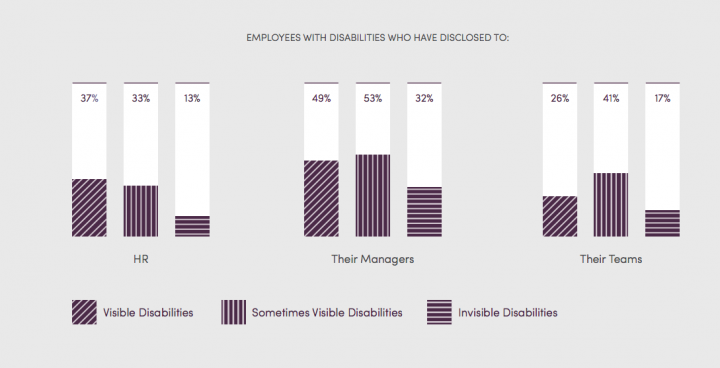 Many workers who are reluctant to say anything fear alienation, especially in corporate, white-collar settings. CTI found that employees with disabilities were equally (and sometimes more) ambitious as those without. Seventy-five percent of employees with disabilities said they “have an idea they thought would drive value for their companies, [and] of these employees, 48% say this idea would serve the disability market” — which would possibly create needed solutions.

However, many employees feared that disclosing their conditions could “at worst, stall their progression.”

That exclusion generally manifested in four ways: misjudgment (underestimating their intelligence, assuming they are more junior in the organization than they actually are); insults (badmouthing, telling jokes at their expense, talking behind their backs); avoidance (avoiding looking them in the eye or talking to them); and discomfort (staring, seeming nervous).

Employees with disabilities face a number of challenges, but many of them also talked about having confidence in their abilities to be problem solvers and be assets to their companies, if given a fair chance. Every workplace is different, but CTI outlined some suggestions for where employers can start to make a difference, from including having disability as a measure of their “overall diversity focus,” and designing office spaces and providing tech tools “that have been designed with users with disabilities in mind.” (Not to mention, bringing up the topic of accommodations during the onboarding process.)

“When there was a conference up a flight of stairs that I couldn’t reach with my wheelchair, they moved it to the ground floor for me,” one survey respondent, a millennial manager in accounting, told CTI. Another worker, an employee at Unilever said it was a “big help” when their managers made it “very clear that you can provide value even if you don’t come into the office every day.”