Startups are using technology that follows the movement of the eye to diagnose nearsightedness and help people with disabilities.

From the Wall Street Journal

For Pat Quinn, eye-tracking technology is a lifeline to the world. Mr. Quinn, who suffers from amyotrophic lateral sclerosis, or ALS, is almost completely paralyzed. To speak, write, change the television channel or turn on the lights in his Yonkers, N.Y., home, he flicks his eyes over a computer screen. The device has an infrared camera below the display; he can “click” on files, links or letters on a keyboard by looking at them.

“I honestly don’t know how patients remained active without this. I use it every second I am awake,” said Mr. Quinn, 36, through a voice synthesizer. Mr. Quinn works as an advocate for patients with ALS; in 2014, he co-created the “Ice Bucket Challenge,” a viral social-media campaign that raised $115 million for research into ALS, also known as Lou Gehrig’s disease, according to the ALS Association.

Mr. Quinn’s device is one example of how eye-tracking technology is surfacing in the medical field. Health care professionals are beginning to use it to teach medical students, improve surgeries and diagnose issues such as nearsightedness. One day, the technology may even help treat eye diseases.

Assistive computers and speech-generating devices like Mr. Quinn’s are not new. The physicist Stephen Hawking used one for decades, but that device and most others like it required patients to select words using a joystick or physical switch. Mr. Hawking controlled his computer by twitching a cheek muscle, a painstaking method that made it increasingly difficult to communicate as his disease progressed.

In contrast, Mr. Quinn’s device, made by Stockholm-based Tobii, is quicker, more accurate and easier to operate, says the company. Tobii was founded in 2001 after John Elvesjö, then an engineering student, built a computerized camera that could count bubbles in liquids. After realizing it could also track his pupils, he began developing an eye-tracking system that could control a computer. The team initially positioned its system for use in scientific research but quickly identified a market in health care. “We had experts approach us at trade shows and conferences saying, ‘Do you understand how much good this could do for people with disabilities?’” said Henrik Eskilsson, chief executive and co-founder.

“Going into the 21st century, this technology will allow people with all kinds of disorders to go to work when they hadn’t been able to do that in the past,” said Howard Green, deputy director of professional services for the National Organization on Disability. 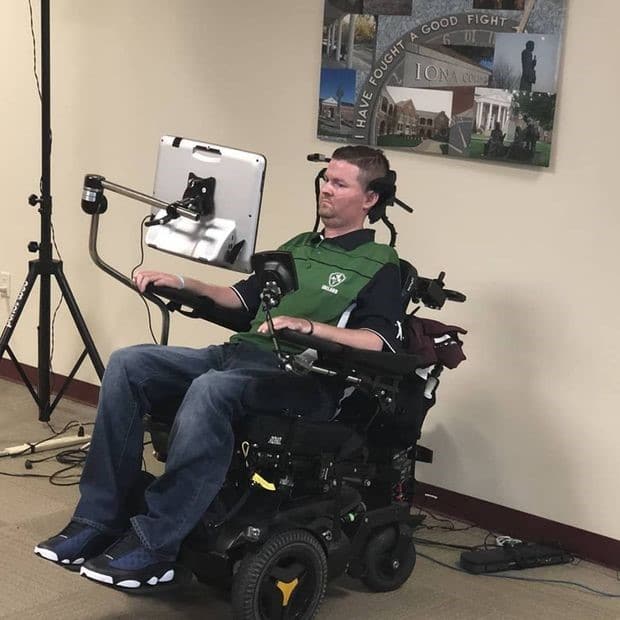 Pat Quinn, the co-creator of the ‘Ice Bucket Challenge,’ a viral social-media campaign that raised funds for research into ALS, gives a speech using a Tobii device. Photo: Pat Quinn

The technology faces some hurdles to mainstream adoption, including the price. Tobii’s flagship speech-generating devices, like the one Mr. Quinn uses, retail for $14,000. Most patients are able to subsidize that cost using private health insurance or Medicare, the company says.

Consumers may balk at the potential invasion of privacy. But, experts say, eye-tracking devices only “see” the area around the eyes in near-infrared, and use that to calculate the coordinates of the user’s gaze. They don’t save or transmit images, so they can’t be used for spying. A computer equipped with eye-tracking hardware knows what you type or what you click, similar to a computer equipped with a keyboard or mouse.

Eye-tracking technology has been around for decades, but the devices were complicated, said Werner Goertz, senior director at the market research firm Gartner Inc. Today, companies such as Tobii are selling technology that allows other companies to add eye-tracking capabilities to their own products, allowing startups in industries including health care, retail, automotive and consumer electronics to test it out. “You just buy it off the shelf and stick your own application on top of it,” said Mr. Goetz.

One Tobii customer, Atlanta-based ControlRad, says it has developed a system that uses eye-tracking hardware to help control X-ray scanners, reducing patient and doctor radiation exposure during surgery. Typically, when surgeons X-ray patients during procedures, they must constantly scan a region of the body with large doses of radiation to produce high-resolution images. ControlRad’s product uses low-dose radiation on the body, focusing the high-energy radiation only at the point where the doctor is looking. The company is seeking approval from the U.S. Food and Drug Administration and hopes to release the system next year.

Medical schools are also using eye-tracking devices to help teach future doctors. At the German Heart Center in Berlin, instructors wear glasses equipped with eye-tracking cameras while they perform complicated procedures including heart-bypass surgeries. Students watching the operation on a monitor can see what the doctor is looking at, without stopping the procedure to gesture or point.

Other eye-tracking applications are used for diagnosis. The Israeli company NovaSight sells a vision-assessment system that requires patients wear LCD glasses and watch 20- to 60-second videos on an eye-tracking tablet. The test can identify vision impairments including myopia, or nearsightedness, as well as color blindness and contrast sensitivity, according to Moshe Barel, vice president of sales and marketing. NovaSight has signed an agreement with Essilor International, the French ophthalmic optics company, to sell the product to hospitals and vision clinics.

Demand for donated organs far outstrips supply. But researchers are working to remedy the crisis using everything from gene-edited pigs to 3D-printed tissue.

NovaSight’s product could help address weaknesses of current vision screenings, which do not mimic real life, said Dr. Rajat Agrawal, an ophthalmologist and chief executive of the eye-health nonprofit Retina Global. “You sit in a room with controlled lighting and look at a chart at a fixed distance while your head is still,” he said. Watching videos on a tablet replicates a more natural, real-world activity and doesn’t require the user to self-report. “It could play a significant role in years ahead in terms of visual screening,” said Dr. Agrawal, who is not affiliated with NovaSight.

Researchers at Texas Tech University and the University of Massachusetts, Boston, have used eye-tracking headsets to study autism spectrum disorders in children. When most children look at another person’s face, their gaze tends to focus on the eyes and nose; autistic children’s gazes wander. The research could eventually lead to systems that allow doctors to identify neurological impairments in children who might otherwise be too young to diagnose.

The next step for eye-tracking systems may be the treatment of disease. NovaSight is testing hardware that it hopes will be able to cure amblyopia, better known as lazy eye. Standard treatments require patients to wear an eyepatch for months so their affected eye gets stronger with use. With NovaSight’s system, they watch a few minutes of videos every day on a tablet equipped with eye-tracking hardware. The videos are precisely blurred so the patient’s lazy eye has to compensate, according to the company. Mr. Barel said the system has passed a small clinical trial in Israel and will undergo a larger trial in the U.S. next year.

Mr. Goetz of Gartner expects more eye-tracking products to hit the market in 2020, thanks to the increased availability of low-cost hardware and basic technology that is safe and reliable. Meanwhile, Mr. Quinn remains an evangelist for his eye-tracking tablet. “I’m still growing and having amazing moments in my life, and I couldn’t do it without this technology,” he said.